If you're a developer of facility automation systems or controls for hotels and facilities that use BACnet communications software, chances are you've had a hard time finding ways to interface BACnet equipment with the hotel's reservation or property management system (PMS). If you've looked at the BACnet standard, you know that even simple communications functions can present some daunting problems, and you probably don't have the time to become that much of a BACnet expert. The PMS itself is probably proprietary and completely unfamiliar. You need a quick way to interface between popular proprietary PMS and BACnet-based automation systems.
You need BACroom™.

BACroom is the industry's first easy-to-use BACnet interface for hotel reservation and property management systems. BACroom runs under Windows 7/8/10 and Server 2012, and provides a robust and proactively supervised interface tailored to the needs of BACnet designers.

BACroom operates as a middle man between a PMS and BACnet devices that control HVAC for rooms. Up to 2000 rooms (in some cases even more) can be configured at one time. Periodically, the PMS sends a message to BACroom that indicates whether a given room is vacant or occupied. BACroom periodically transmits this occupancy status, using BACnet, to BACnet-based HVAC controllers.

Each room is configured to have a correspondence with one BACnet object property in one BACnet device. Each room may use a different BACnet device, object and property, and all are individually configurable. 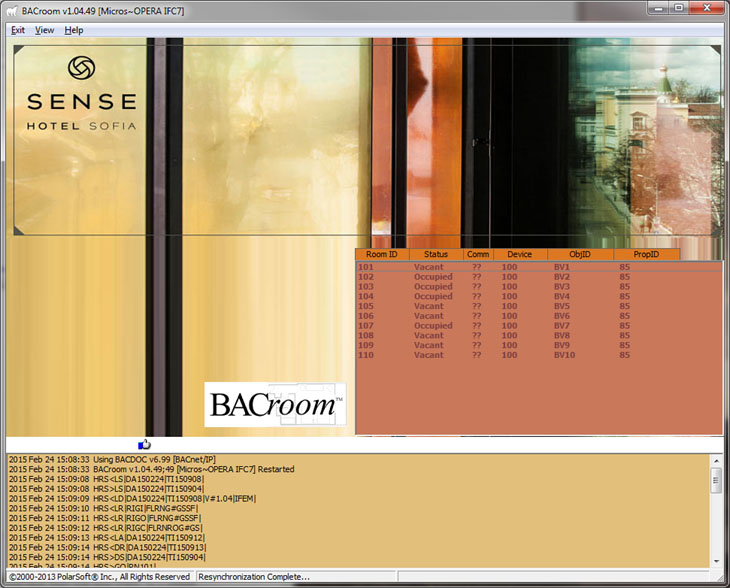 The value that is poked to (written to) the BACnet device is configured by specifying a BACnet device instance, object identifier and property identifier. Array properties are not supported. The property to be written must accept an unsigned enumeration, or real, type of value and all of the rooms must use the same data type for values to be written. The value that is written typically represents 0=vacant, 1=occupied, but other values can also be used.

BACroom depends on receiving a message from the PMS at a periodic interval to indicate that PMS is alive. This supervision can be disabled for PMS that do not provide supervision signaling.

A typical system connects the PMS PC (in this example Micros-OPERA) on the same Ethernet LAN with the facility automation system using BACnet. BACroom communicates with OPERA to get occupancy information and relays this status to BACnet device(s) using BACnet.

BACroom is designed to be customized for different kinds of PMS interfaces. A number of widely used interfaces for Ethernet, TCP/IP, and various serial port protocols are available without requiring customization. Please contact us for a custom quotation.

We Know the Territory

Polarsoft is a creative team of design and development professionals who apply advanced technology to solve complex communications problems.

Our unique team brings together decades of deep experience in human-interface design, distributed object-oriented databases, direct digital control (DDC), networking and real-time systems. Using these skills, we've helped many clients put the most modern technology to work solving their automation and communications problems, and integrating their products with diverse systems.

PolarSoft has been involved with BACnet from the very beginning. Since its inception in 1987, PolarSoft's founders have been very active in the ongoing design and development of the BACnet standard, as a voting member of the standing committee SSPC 135 until July 2000, then again as a voting member from 2008 to 2018. Our involvement continues as active committee members today. We have participated in every aspect of BACnet's development including the authoring of a large portion of the actual text of the standard. This experience gives us a deep and detailed understanding of BACnet.

We are an independent supplier of the largest selection of BACnet software products worldwide.

PolarSoft offers a wide range of tools and software, as well as consultation services for BACnet developers and vendors. You won't find any better BACnet expertise anywhere in the world. We continue to lead the way in innovative BACnet products, tools and consultation.

Founded in 1993, by David Fisher and Jack Neyer, PolarSoft Inc. is located in Pittsburgh PA, in the center of Pittsburgh's High Technology renaissance. With a growing, worldwide client base, PolarSoft has an extensive portfolio of products and projects that showcase the company's unique skills.

All of PolarSoft's products are designed and implemented in the United States of America.

©2022 PolarSoft® Inc., All Rights Reserved  •  pricing and specifications subject to change without notice!